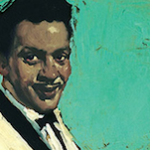 I found about Chuck Berry’s passing totally by accident. Was offline decompressing and just happened to glance at the newspaper. Chuck dead? That has to be an oxymoron. Chuck Berry is immortal. His stamp is on every rock and roll or R&B song written since the mid-1950s. Forget about musicians being in his debt. Everyone owes Chuck for “Maybelline” and “Johnny B. Goode”. Everyone owes him for the cafeteria reminiscences in “School Days” and the exasperations in “No Particular Place To Go”. Everyone owes him for pronouncing rock’s ascendency in “Roll Over Beethoven”. 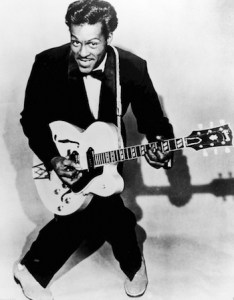 Time to give the master his due:

Whether it was for the seminal guitar licks that echoed in The Beach Boys “Fun Fun Fun” or “Surfing USA”,

Or Johnny Rivers’ version of “Memphis” or The Animals’ cover of “Sweet Little Sixteen”.

The Rolling Stones covering “Around and Around” (And the Beta Blockers too!)

Or Elvis doing “Too Much Monkey Business.”

Or The Duane Allman, The Kinks, Emmylou Harris, David Bowie, Simon & Garfunkel, Bruce Springsteen, The Band, MC5, and literally thousands of others  through the years covering “Carol”, “You Never Can Tell”, “You Can’t Catch Me” etc.

We owe Chuck for the scene in “Back To The Future” where Marvin Berry (of Marvin Berry and the Starlighters) holds the phone so his cousin Chuck could hear the wailing licks of time traveler Marty McFly.

We owe Chuck for the elegant brilliance of his lyrics describing not just a generation but youth across the globe in every subsequent generation.

Chuck’s personal life might have been a bit of a train wreck, but his work created the mortar for Rock and Roll, which has proved to be the springboard for just about every new genre since.

As Eric Burdon so poetically said of Chuck in the groundbreaking album “Winds Of Change” way back when: 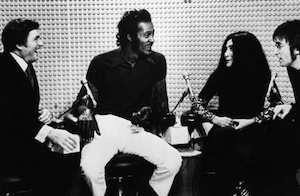 But no one said it better than (who else?) John Lennon when he was quoted as saying:

“If you tried to give rock and roll another name, you might call it ‘Chuck Berry”

The immortal Chuck Berry is gone, but his influence lingers proud and strong.

So Roll Over Beethoven… and tell Tchaikovsky the news. 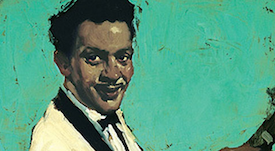