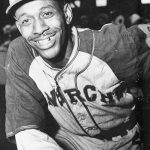 Today is Leroy Robert Paige’s 109th birthday. Or maybe his 110th. Satchel himself wasn’t too sure but settled on 1906. For those of you who don’t know about Satchel Paige, he was the greatest pitcher in the Negro Leagues and might have been the greatest pitcher in Major League Baseball had he been allowed to pitch in that league. Eventually he did, and at age 42 became the oldest MLB rookie ever. He was also the first player from the Negro Leagues to be inducted into the National Baseball Hall Of Fame. So whether he would be 109 or 110 today, pay attention to the great competitive and barrier-breaking legacy he left behind and also his observances on how to keep young which never seem to be out of style.