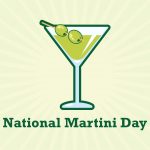 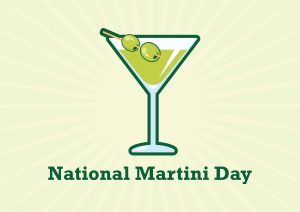 Whether you like yours shaken or stirred, with gin or with vodka, with a twist or with olives, or as part of a more extravagant drink – National Martini Day, June 19, is the perfect day to celebrate this cocktail.

Like other origins, the birth of the martini is up for debate, whether it be from a town called Martinez in California in the late 1800s or from a New York City bartender named Martini di Arma di Taggia in the early 1900s, either way, the infamous martini is a signature cocktail with a pop culture twist!

In the years following, the martini gained some notable fans, with Ernest Hemingway, Franklin Roosevelt and Frank Sinatra all claiming it as their signature cocktail. And of course, we have to mention its references in James Bond (“shaken, not stirred”), Mad Men and Sex & The City.

Interestingly enough, in the 1960s and 1970s, the term “three-martini lunch” was used to describe a leisurely lunch enjoyed by businesspeople. The three-martini lunch became particularly identified in popular culture amongst Madison Avenue advertising executives, who supposedly became more creative after such lunchtime festivities (don’t worry, PMGers cut it off after one at lunch!).

Several years ago, AdAge conducted a case study: The Effects of a Three-Martini Lunch on the Creative Process. The results? Drinking at lunch doesn’t mean you’ll become smarter or more creative – however it could make for good jokes at the company luncheon!

However you choose to celebrate this year’s National Martini Day – Cheers from PMG!